In my daily travels I saw constant examples of “concealed carry.” I put that phrase in quotes because of the fact I SEE the concealed carry. I see it all. Full size hand cannons “concealed” under tight fitting tee shirts, eight inch bowie knives on belts, keep honking I’m reloading stickers, and the occasional slung up AR getting out of a truck just because they can.

Some of you may take offense to what I’m about to say, but please take it with a grain of salt. It’s obvious I’m a huge second amendment supporter; I live the second amendment every day and rely on it for my livelihood and peace of mind. However, those who don’t know me would have absolutely no idea that I am a “gun guy”. There are no Sig stickers on my truck, no “driver only carries $20 in ammo” sticker, life member sticker (even though I am), no police or military stickers. In fact there are no stickers or indications of anything on my truck. Why, because I’m a big fan of flying under the radar when off duty or not working.

The other is because I typically have guns in my truck and certainly don’t want to entice anyone to take them when I’m not around. I am one of those people who religiously carries a gun every day, everywhere. Typically I have an ankle gun and an appendix gun. But you would never know this because you would never see them. Nor would you see my gun industry tee shirt concealing it. Because I don’t were them unless I’m working around the house or shooting at match at my local club.

I carry a gun for one reason; protection. For me it is the ultimate insurance policy to protect me, my family, or others in case of an extreme emergency. The only one besides close immediate family who needs to know this is me. An example 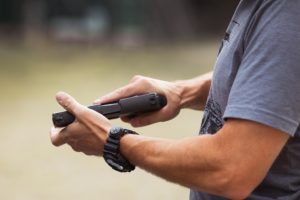 of this is my beloved step mother who passed away a couple years ago. One day we were having a conversation about
guns (she was not a very big fan to say the least, but I appreciated her opinion). We were specifically talking about concealed carry. She said to me that she never saw me carrying a gun. I told her that was the point. Then I told her she probably had not seen me in the past 20 years that I didn’t have a gun on me. I then showed her the two I had on and she was shocked.

I hope you are following my point… My carry guns are for protection however; my primary means of protection is my brain and solid situational awareness. Two things I can do really well are shoot good and run fast. I rely on the later as the primary mode of getting out of situations. I’m not getting in a gun fight for something stupid. Something stupid constitutes anything other than the potential imminent loss of life. Someone wants my wallet, no problem, here it is. Someone wants to car jack me, no problem keys are in it. You want to hurt me or my family; we are going to try and get away to safety. No other options: very bad day to be a bad guy around me.

I’ve always favored the quiet professional demeanor.I am a proud and vocal supporter of what we do and stand for, I just choose to do it in a quiet humble way. This approach may not be for everyone and I certainly don’t think less of anyone who does not share the same option. We are all in the fight together.

No matter what you do, make sure you get professional training on concealed carry. I’m not just talking about the permit processes and knowing the laws. I’m talking about no-kidding, hands-on, concealed carry firearms and tactics training. Master your defensive tool and know how to manage it in any situation you could potential find yourself in. And for those of you who have a selective concealed carry routine, meaning you carry sometimes ‘when you think you may need it”. Stop fooling yourself. If you are going to carry, then carry like it’s your job. Make the commitment, invest in the quality gun and gear, dedicate some professional training time and follow up range sessions. But most of all be smart and consider a low profile concealed carry lifestyle.

Now this bears repeating. I carry a gun for one reason; protection. For me it is the ultimate insurance policy to protect me, my family, or others in case of an extreme emergency. The only one besides close immediate family who needs to know this is me. How will you approach your concealed carry now that you’ve read this? Do you already keep a low profile? Or have you been the one who has to tell everyone you’re carrying at this moment? I hope you learned something from this article. Share your thoughts about this important subject below.