How can a CCW holder secure a firearm when briefly entering a school parking area for pickup or drop off of a student, so they can have a firearm after leaving the school grounds? 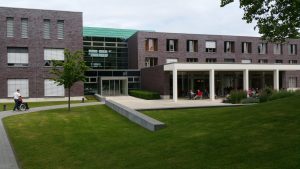 Now, the local districts can waive that if they want to, but none of them do. So even driving on for a few minutes, you’re not under McClure-Volkmer because your ultimate destination is a school and you are on the grounds. It doesn’t say buildings, it says grounds and so it may be  difficult in a situation like that.

Yet, if you compare this situation to being in another state like Kentucky, the rule may be if it stays in your car, you can have it. It can be loaded. It can be up front. It can be anywhere. It just has to remain in your vehicle.

Then under the whole Federal School Zones Act, to have it loaded you’ve also have to have a permit from the state that the school is located in, so that’s another layered requirement.

But if you’re in a state that bans possession completely like New Jersey, it’s no guns on school grounds. So even having the gun in your trunk, unloaded, cased, almost like a paperweight or a boat anchor, technically it’s illegal if you’re driving on the school grounds.

We just don’t know how you can do it and get around the blanket rule in a state like that which bans it anywhere, even if it’s on school grounds. It doesn’t make an exception.

Other states do make exceptions. They’ll say after dropping off or picking up your child, it’s okay. If it remains unloaded and cased in the trunk it’s okay. But there are some states that basically say anywhere. It’s almost like you are in a federal facility, there is no exception.