ADAM PAINCHAUD: I assume you’re out there packing a gun every day, what’s on your mind? You carrying everywhere all the time, no matter what with your travels, what are your thoughts?

KRIS PARONTO: Well, when I’m home I do. I have it all the time. The problem with me traveling and especially the amount I traveled last year and sometimes unexpectedly to go into places and this is what I don’t agree with the United States, some of these states I can’t get in with the gun. I go to New York City with a gun, I’m arrested even if it’s in my checked baggage. And it’s tough. 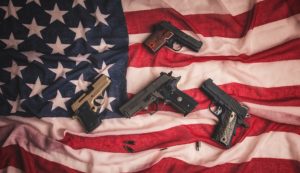 I’ve been carrying forever. I’ve been carrying in places that I shouldn’t have carried. You carry in the Middle East somewhere and you get caught with a gun, not good. But I’m used to carrying everywhere, so I don’t have a problem with it. It doesn’t bother me going into – and I’m not trained to go break the law by any means.  But you know there are times where you don’t want to be in a situation where you need a gun and you don’t have one. But because of the laws that I do respect, the laws of this country, the laws of some of the states, California and New York to be specific and New Jersey, I can’t get a gun in there.

When I travel, I have to leave it at home. Even if I’m not scheduled to go in those states because I’ve had times where some things changed and I’ve had to go do maybe a TV show at Fox Studios or go do the Patriot Network there at Sirius XM and if I had a gun on me I can’t get in or I’ll get arrested. And when I don’t have it, I do feel naked. It feels like I’m missing an appendage. I feel like I’m missing a hand and I really hate it. But I always at least still have a knife on me at all times just so there’s something there because the worst thing in the world is finally needing so 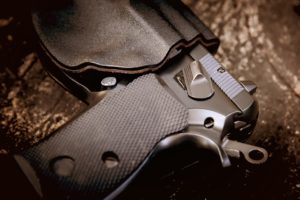 mthing and not having it at your disposal.

An example again would be Benghazi. I wish all of us would have had 203s on our rifle systems, on our weapon systems. We needed them and didn’t have them and that’s an example of hey, something you needed that could have quelled the situation a lot quicker than just a little 556, but we didn’t have them at our disposal. So, the answer to you is when I can carry and I legally can carry in a state, I have my gun with me. But when I’m traveling , I can’t and I feel like I’m not vulnerable, I just feel I’m missing a part of me.

Most people know Kris Paranto as TANTO from the movie “13 Hours – The Secret Solders of Benghazi” as well as his books. Hear the full interview between Adam Painchaud and Kris Paronto, Want to hear more interviews with other firearms experts? Articles, videos and podcasts like this are just a fraction of the benefits available when you become a member of the E3 Firearms Association community. Learn more about membership here.

Adam has since transitioned to being the President and Co-Founder of E3 Firearms Association. He also continues to serve as a police officer. Adam remains active helping with training agencies, SWAT teams, and the community. Looking to make a positive difference, he is  dedicated to the firearms community and in people’s lives. Adam is the driving force behind E3 Firearms Association.