Scott Kappas, an attorney and author, was born an 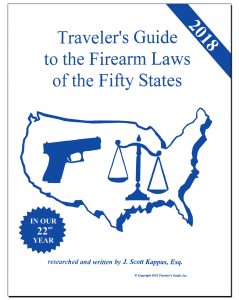 d raised in the great gun-loving commonwealth of Kentucky. From an early age, Scott learned from his parents to appreciate the personal liberties that Americans enjoy more fully than any other people as he he learned about state gun laws first hand.

On a family vacation to the northeast, he found that not all rights were as well respected as others. The sign at the Massachusetts border stated “minimum 1 year in prison for violating any firearm law of this commonwealth.”

Thinking this applied only to felons possessing firearms, Scott and his family ignored the warning and continued onward.

Upon returning home, he found that simply having a gun in the glove compartment without a Massachusetts carry license would be enough to send him to prison for a year. He decided to research the issue and find out more.

This was how Scott’s book, the “Traveler’s Guide to the Firearm Laws of the Fifty States” was born.

“Because of his book, I was saved from serious situations in the New York and Massachusetts area because I grabbed his book. Just a few pages of his book probably saved me thousands in attorney’s fees, a police record, and a jail cell over the weekend.”

As a responsible firearms owner, Brian sought out Scott’s book and read it. Having Scott’s book certainly helped him to become educated so he could responsibly travel through different states.

Since 1996, Scott Kappas educated himself on the different laws across the US regarding traveling and crossing state lines with firearms.

One of the motivations for writing the book was practicing law in Kentucky back in the early 90s, before either Ohio or Kentucky had a permanent process in place for concealed carry.

It’s a very odd thing. When you look at gun laws, they are radically different from state to state. In the past 20 years the NRA and other organizations have done a lot to make concealed carry more of a practical option for people.

While things have gotten more political in the years since the 1950s, and a lot of people still say “I wish I could go back to the good old days”… Generally speaking, we’re a lot better now when it comes to carry than we were if we go back 45 or 50 years. One of the reasons for this is preemption laws and the concealed carry laws.

But for the past 23 years Scott has been monitoring how laws are changed, and for the most part, the good states, like in the southeast and the west seemed to get better.

However, the states along the northeastern seaboard tend to get worse. It seems like it’s a never ending thing. California gets more restrictive each year, but then places like Tennessee and Ohio and areas seemed to get better. Just know that gun laws are different from state to state.

Scott Kappas is the author of “Traveler’s Guide to the Firearm Laws of the Fifty States.” It is available online at www.GunLawGuide.com