Recently we discussed suggestions on how to interact with law enforcement (while packing heat) during a traffic stop. Now we are going to discuss do’s and don’ts if you ever find yourself dealing with law enforcement responding to a shooting or other critical incident. It is important to understand that specific laws in your state/region may dictate other than what I am suggesting. I strongly recommend you know the law where you choose to carry and arm.

Generally speaking and most importantly, DO WHAT YOU ARE TOLD TO DO by all responding law enforcement or anyone who identifies themselves as law enforcement. Proceed with a high degree of caution! Realize they are responding to a call involving guns and likely violence, therefore they will have the priority of securing the scene first. What permit you have, what happened, why you have a gun in your hand, why people may be injured, and anything else for that matter is irrelevant to them initially. Making the scene safe is the priority and they will assume (as they should) that everyone present could possibly be a threat. Be prepared to be de-armed, detained, and questioned in a fairly aggressive manner. Once the smoke clears, they will understand who is who and what happened.

This may take some time, so be patient and do your best to remain calm (easy to say). If a threat is still present, inform them in a clear and concise manner where/who that threat is. Also, If the situation is not active (suspect no longer present, suspect no longer a threat, situation already resolved, suspect not an imminent threat to the public) then there is no major urgency for you to try and explain what happened until they secure the area and start asking you questions. 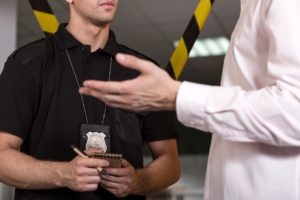 When you are the one who calls the authorities or you ask someone to call, it would be very helpful to give the dispatcher as much relevant information as possible. “I have just been in a shooting, I was attacked, I am a white male, bald, medium build, wearing a tan jacket and blue jeans. I am holding a white male suspect wearing a black hoodie and tan pants at gun point near the ATM machine.” This way, responding officers will have a general idea of what they are walking into, thus increasing your safety. If there is no imminent threat and no need for you to have your gun in hand, I’d suggest securing it on the ground or holster.

If the situation permits, having your arms/hands up when law enforcement arrive would be smart and convey you don’t mean any harm. Once responding officers secure the scene and any imminent threats, they will want to identify the primary aggressor. If that person has fled, you’ll want to try and provide that information as soon as possible. “I was just robbed by a man carrying a knife, I drew my pistol and he ran away down Main Street toward the bank. He was a white male wearing a white t-shirt and black shorts. He had on a red ball cap and had a huge bowie knife.”

Another consideration is that off duty or plain clothes law enforcement may already be present. Take an altercation in a store or public place as an example. You may be acting within the scope of the law defending yourself or others but that off duty federal agent who sees you pointing a gun at someone may not necessarily understand what is going on. Therefore when he identifies himself and says don’t move…do what he says. In this case, using extreme caution is best while attempting to convey the situation to the agent. Smart, clear, articulate communications will be your best defense. “This man just attempted to rob the clerk with a gun, the gun is still in his waistband, help please.”

When responding officers come to or enter your home, follow the same advice. If at all possible, I suggest greeting the responding officers outside of your home perhaps on a porch or driveway, that way they can rule you out as a threat quicker, and receive relevant information from you without having to make an unknown entry into your home. Of course only do this if the suspect(s) are no longer present or pose a threat. If you are still in contact with the threat inside your home, try and convey this to responding officers through dispatch or a 911 operator.

Be specific as to where in the house you are located in relation to the main entrance. “I am a white female holding a white male at gun point, he broke into my home and threatened me, we are in the second floor bedroom located at the top of the stairs, straight ahead from the front door.” Be prepared to do whatever the officers tell you to do.

You were the one who had your rights and safety violated. You did what you had to do by making a smart decision to protect yourself or others. Responding law enforcement will likely arrive to investigate the crime that already occurred. They may not necessarily be there to intervene with a crime taking place. Typically these types of situations are already over when law enforcement arrives. Law enforcement will come in hot and expecting the worst. Therefore any information you can articulate to them prior to their arrival is advantageous to your safety. Your cautious actions and clear verbal communications upon their arrival are paramount for your safety and theirs.

You’ve just received an excellent summary of what to do when if an altercation or critical incident shooting occurs. Did you find this information useful? Can you see how to apply it to your life if you were to enter in a similar situation? Have you ever been in a scenario like this? What was the end result? Share your thoughts below.